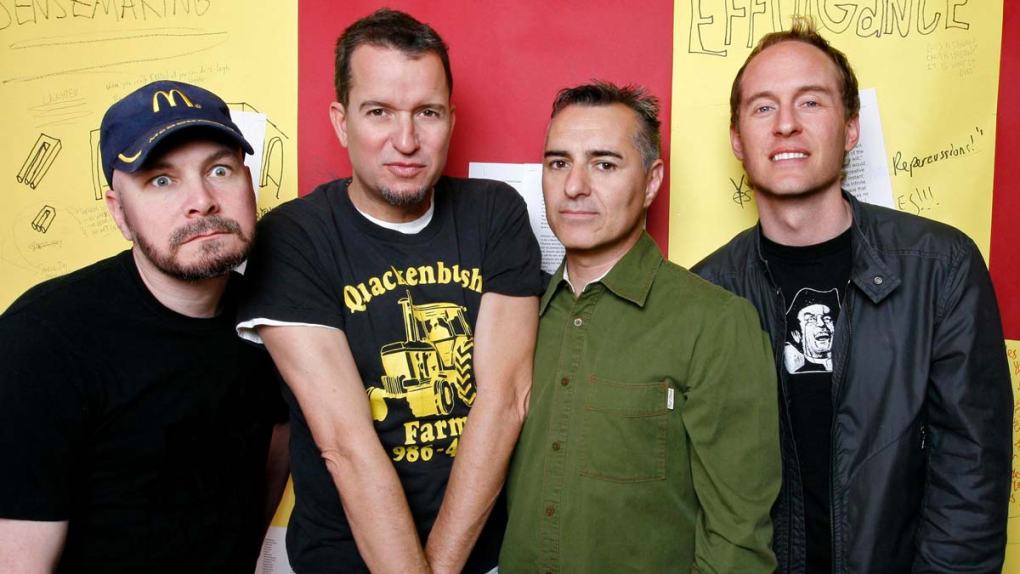 It has been a little over 25 years since The Vandals’ album ‘Live Fast Diarrhea’ was released. The name ‘The Vandals’ refers to a punk rock band from Huntington Beach, California. The album contains eight sharp punk rock songs that revived a fast-fading career.

The Vandals may not be a music band that likes to remind us how long they have been around, but it was worth celebrating the album’s 25th anniversary. Therefore, the band put out a vinyl rerelease of their album as a limited-edition product.

The bassist of The Vandals, Joe Escalante said that a man named David Stowe is a helper from the punk rock music scene to some extent. Stowe not only helps individuals with their music merchandise, but he also makes watches for many punk rock bands. Escalante said that it was Stowe who recommended the viny rerelease of their album. It was the first time The Vandals did something like that because they wished not to remind us that they were older than a few other bands.

Escalante said that people felt that The Vandals was a new band back in 1994 as they started to play with the likes of Blink 182 and Lagwagon. The Vandals bassist said that the band did not tell those people that they had been a part of the punk rock scene for 14 years.

The Vandals was formed way back in 1980. The band released a few albums starting with Peace thru Vandalism, their extended play or mini-album. However, the one we are talking about here was the breakthrough album of the punk rock band from Southern California. That is why the band looks back on the album fondly.

The drummer of The Vandals, Josh Freese, listens to music more than the other band members, said Escalante. Freese has four children; the kids often go with their father in their car as he plays the records of his band. Escalante has no children, so this does not happen to him.

Escalante termed ‘Live Fast Diarrhea’ different for his band as they paid for themselves for the first time with it. Almost every band keeps money to record, create a record, and release it by themselves in the world of punk rock. However, The Vandals got an agreement with the label Epitaph Records. That record company folded fast, and returned soon, so The Vandals bounced around music labels, even as they had an agreement with them, said Escalante. Up to that time, from the late 1980s and early 1990s, it seemed like a decline for the band.

It was an extremely difficult period for the punk rock industry. So, The Vandals, TSOL, Agent Orange, The Dickies, and Adolescents performed at clubs for people aged above 21 years for just $1,000. Earlier, those bands insisted on performing at venues for all age groups.

The Vandals bassist said that those were dark days, and then they started to make changes in personnel. The band included Josh Freese and Warren Fitzgerald in their team. The 25-year-old album became their first production. They recorded the album quite cheaply, and Fitzgerald made it, so it was self-produced, said the bassist. Thom Wilson produced The Vandals’ Peace thru Vandalism. Wilson was a well-known punk rock producer back then. On the other hand, The Vandals was still making a new beginning 14 years later.

After Live Fast Diarrhea’s completion, the band sold the album to Nitro Records, which was the record company of The Offspring’s songwriter Dexter Holland. The relationship worked well for all the parties concerned. Holland was happy to work with The Vandals, whereas the Southern California band got the advantages that accompanied the arrangement. One of those benefits was the chance to fly on a business jet.

All the team members devoted their time entirely to The Vandals from 1996 to 2006, when they felt the band was done. The revival started with this album. They were no longer playing at bars; instead, they worked with Lagwagon. It represented the novel punk rock scene where every band had to come up with great tracks.

When The Vandals started, they only had to have some aggression and some form of an image to reach the highest position in the industry. The Go-Go’s was among the few punk rock bands that wondered what would happen if they had good tracks. NOFX was awful, but then the band penned amazing tracks, said The Vandals bassist. So, The Vandals considered the same.

Escalante said that it mostly seemed impossible that it had been 25 years since The Vandals recorded their album, and that it seemed like 50 sometimes.

In those 25 years, there was a 10-year period where full-time rock musicians went on tours. So, Escalante found it strange that the same group of performers had been around for nearly 30 years. The bassist’s confidence is such that he felt even a 1-year or 2-year break in their career due to the epidemic would be insignificant. Escalante felt bad for newer bands that progress more slowly. As for The Vandals, they would take a break, said Escalante.

That busy 10-year period culminated with The Vandals’ 2004 album entitled ‘Hollywood Potato Chip’. After that, the band members have relaxed slightly between performances at American and European festivals and the odd track releases. In 2020, The Vandals released the track entitled ‘The Curse of the Unripe Pumpkin’. The great uncle of Escalante, Baron Keyes wrote that old Halloween-like and quirky track.

Escalante’s uncle was an extremely flamboyant announcer at an LA radio station in the 1930s and 1940s. Escalante discovered the song when the record label Cleopatra Records requested The Vandals to be involved in a Halloween-special compilation album. Escalante knew that his uncle wrote a Halloween track since his grandmother sang it to him many times. The bassist discovered it from his uncle’s show’s radio archives, and he considered it a great track.

Last year, Escalante also said that The Vandals was taking part in compilation albums. One of those compilation albums was Dr. Demento Covered In Punk. He felt that his band would do another compilation album for Cleopatra Records in the yacht rock genre. The record label acquired Warren Fitzgerald and Joe Escalante’s company Kung Fu Records. The bassist felt that it was kind and thoughtful of Cleopatra Records to buy his label. Therefore, his band was attempting to do anything the record company would demand from them.

So, he said that Cleopatra Records would keep doing the compilation work and that the epidemic would possibly not affect their work much. After all, they need not ‘live fast’ any longer, said Escalante.